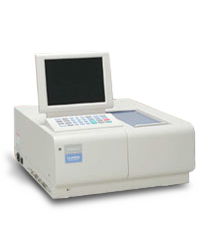 In double beam design, the energy of the light source is divided into two with a half mirror so that one passes through the reference side, and the other through the sample side, which is unavailable with the single beam design. Since the reference-side energy is also incident on a detector, photometry is carried out on the basis of this signal. Therefore, an energy change in the light source can be compensated to ensure stable measurement for a long time.

The optics of this instrument adopts the Seya-Namioka monochromator widespread as a representative concavediffraction grating monochromator. Because a concave diffraction grating has both beam condensing and dispersing functions, an optical system canbe configured with fewer mirrors. In a spectrophotometer, use of fewer mirrors signifies a shorter optical path,thus giving rise to an aberration-free bright optics. For elimination of the aberrations which were essentially unavoidable in the past, a stigmatic concave diffractiongrating has been developed by applying Hitachi’s original technology. As a result, a higher resolution has been realized.

EASY OPERATION: Performing at a Higher Level! The operation of the U-5100 is very easy minimizing the operator training time.