The detection limit in flame or graphite furnace atomic absorption spectrophotometry is the smallest amount of an analyte that can be reproducibly detected. This is a function of signal to noise ratio (S/N), so to improve the detection limits the signal level must be increased or the noise decreased or both. Atomic absorption spectrophotometers use element-specific hollow cathode lamps as light sources. Higher light intensity (and therefore improved signal levels) can be achieved using electrode discharge lamps (EDLs) but these can add complexity to the system and are only available for a comparatively few elements (As, Bi, Cd, Cs, Ge, Hg, P, Pb, Sb, Rb, Se, Sn, Te, Tl and Zn). Improving detection limits for all elements comes from minimising noise in the system. 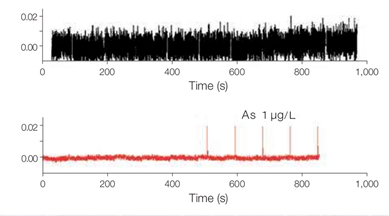 Much of the background noise in AAS results from absorption or scattering of light by atoms, molecules, particles and any other matrix material other than the atom being measured. In flame AAS there is also contribution from flame fluctuation noise, which is caused by the change of transmittance in a flame and the fluctuations of the light path resulting from variations in the flame. One example of this is the excessive shift in baseline observed when the fuel mixture is altered. This is particularly noticeable at high fuel flows.

The corrected absorbance for measuring trace amounts of an element is calculated by subtracting background absorbance from the total absorbance, but there are a number of different instrumental techniques available for measuring these two values. These include the AC and DC polarised Zeeman, Deuterium lamp and Smith-Hieftje background correction methods, although Smith-Hieftje is very rarely used. While DC and AC polarised Zeeman and Deuterium lamp methods are most commonly used in commercial AAS, only the DC polarised Zeeman approach virtually eliminates background signal contributions and gives extremely stable baselines with low background noise in both flame and graphite furnace instruments. All other background correction techniques increase the noise, therefore giving a poorer S/N.

When an atomic vapour (either from a flame or a furnace) is placed in a magnetic field, the well known Zeeman effect causes the atomic lines to split into a π component and two σ components. These react differently to the particular polarization of the light. The π component absorbs only light polarised parallel to the magnetic field, while the very small σ components absorb only light polarized perpendicular to the magnetic field. The light beam passing through the sample from the lamp is randomly polarized in all directions, but any of the light component of the beam polarised parallel to the magnetic field is absorbed by the π component of the atomic line, whereas the component polarised perpendicular to the field is hardly absorbed at all as the σ components of the atomic line are very small. Since any molecules, particles or other background materials in the sample do not exhibit the Zeeman effect, they equally absorb or scatter light of either polarisation. Using a polarizer after the beam passes through the sample separates the light into the parallel and perpendicular components which can be measured independently. The parallel component measures the combination of the atomic absorption and background absorption, while the perpendicular component measures just the background contribution. The difference between the two values gives the atomic absorption of the sample. 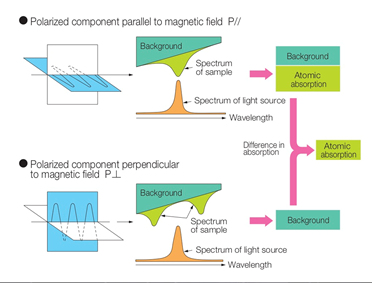 Polarised Zeeman instruments may feature either a permanent magnet (DC design) or a magnet that is turned on and off during the measurement (AC design). In the AC approach, when the magnet is turned on, only the background absorption is measured. When the magnet is turned off, the absorption lines are not split and the total absorbance is measured. However the cycle time has to be kept short due to heating effects and modulation is limited due to magnet hysteresis. AC Zeeman adds to the background noise, degrading detection limits and cannot be used in flame AAS.

This method makes use of a D2-lamp and light from this and the hollow cathode lamp pass alternately through the atomisation cell. The element of interest in the analyte absorbs only its specific wavelength from the continuum source. This is only a very small fraction of the total radiation, so the effect on the continuum signal is negligible, but scattering or broadband absorption causes an equal reduction in intensity for both light sources. Subtracting the continuum source signal from the signal from the HCL corrects for these attenuations. For this method to work correctly, the light from the HCL and the deuterium lamp has to follow exactly the same path through the atomisation cell because in both flame and furnace cases, the background can vary from place to place. If the wrong background is used, the background correction can 'over' or 'under' correct. Using the extra D2 light source and the associated signal processing also means that the baseline noise is bigger by a factor of 2 to 3, which both adversely affects the S/N ratio and degrades the detection limits. 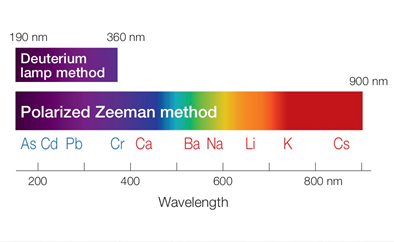 In addition, the D2 correction method can only be used for a limited number of elements since it only operates in the UV region of the spectrum.

The DC polarized Zeeman background correction method leads to extremely stable baselines with low background noise. It offers a true double beam configuration and provides full coverage for all elements on both flame and furnace instruments. The two detector configuration ensures both beams are measured continuously resulting in low noise for better detection limits. For example low levels of cadmium can be made with high reproducibility using DC polarized Zeeman.

Conversely, AC polarized Zeeman and D2 systems give a worse S/N ratio so both these systems give poorer detection limits. The DC polarised Zeeman correction also overcomes the traditional difficulties resulting from fluctuations in the flame itself. 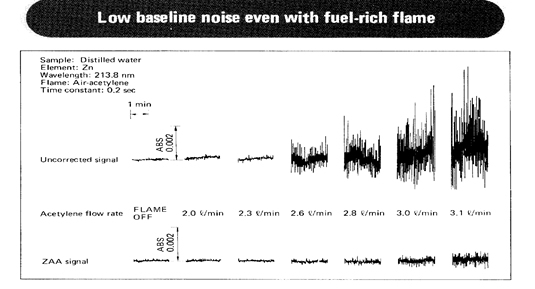 Unlike the D2 method the polarized Zeeman method has no baseline shift due to the organic solvent. 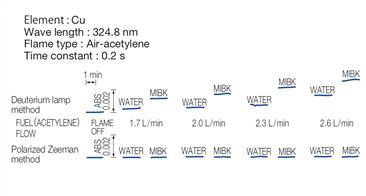 By providing stable baselines with low background noise, the DC polarized Zeeman correction method has improved detection limit capabilities in both flame and furnace AAS and allows a number of applications previously found to be unsuitable for flame AAS to be handled in a routine manner.

Lambda Advanced Technology is a leading supplier of analytical instruments for a wide range of applications, including some of the best-in-class, flame, furnace and tandem atomic absorption spectrophotometers on the market. If you would like more information, simply contact a member of the team today.